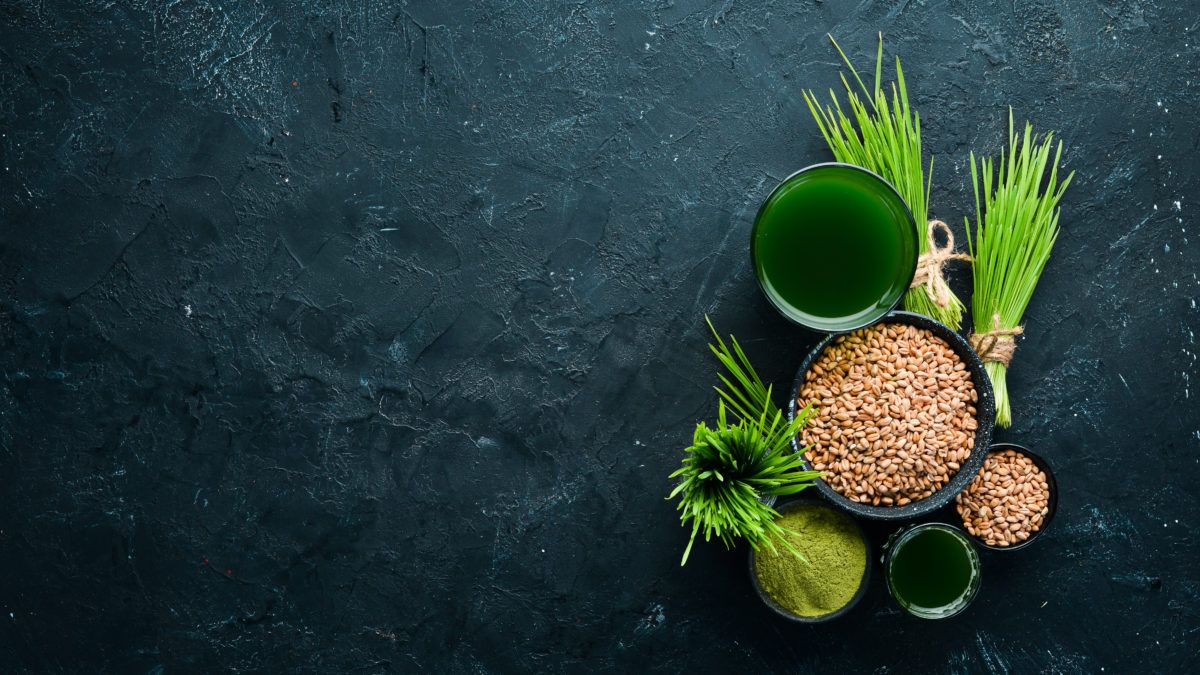 Wheatgrass is prepared from the freshly sprouted leaves of the common wheat plant, Triticum aestivum.

It can be grown and prepared at home or purchased in juice, powder or supplement form.

Some claim it can do everything from detoxifying the liver to improving immune function. However, many of its purported benefits have not yet been proven or studied.

This article takes a closer look at 7 of the evidence-based benefits of drinking wheatgrass.

High in Nutrients and Antioxidants

Wheatgrass is an excellent source of many different vitamins and minerals. It is especially high in vitamins A, C and E, as well as iron, magnesium, calcium and amino acids.

Of its 17 amino acids, eight are considered essential, meaning your body cannot produce them and you must obtain them from food sources (1).

Like all green plants, wheatgrass also consists of chlorophyll, a type of green plant pigment associated with many health benefits (2).

It also contains several important antioxidants, including glutathione and vitamins C and E.

Some studies have found that antioxidants may help protect against certain conditions, such as heart disease, cancer, arthritis and neurodegenerative diseases.

Additionally, supplementing with wheatgrass increased levels of the antioxidants glutathione and vitamin C.

Another test-tube study that evaluated the antioxidant activity of wheatgrass found it reduced oxidative damage to cells.

Given that the research on wheatgrass is limited to test-tube and animal studies, more studies are needed to determine how its antioxidants may affect humans.

Wheatgrass is high in chlorophyll and many vitamins, minerals and amino acids. Test-tube and animal studies have found that its antioxidant content may prevent oxidative stress and cell damage.

Cholesterol is a waxy substance found throughout the body. While you need some cholesterol to make hormones and produce bile, too much cholesterol in your blood can block blood flow and increase your risk of heart disease.

In one study, rats with high cholesterol were given wheatgrass juice. They experienced decreased levels of total cholesterol, “bad” LDL cholesterol and triglycerides.

Interestingly, the effects of wheatgrass were similar to those of atorvastatin, a prescription drug commonly used to treat high blood cholesterol.

Another study looked at its effects in rabbits fed a high-fat diet. After 10 weeks, supplementing with wheatgrass helped lower total cholesterol and increase “good” HDL cholesterol, compared to a control group.

Despite these promising results, further studies are needed to determine how wheatgrass supplements may affect cholesterol levels in humans.

Some animal studies have found that wheatgrass may help lower blood cholesterol levels, but human studies are needed.

Thanks to its high antioxidant content, some test-tube studies have found that wheatgrass may help kill cancer cells.

According to one test-tube study, wheatgrass extract decreased the spread of mouth cancer cells by 41%.

In another test-tube study, wheatgrass induced cell death and reduced the number of leukemia cells by up to 65% within three days of treatment.

One study found that wheatgrass juice decreased the risk of impaired bone marrow function, a common complication of chemotherapy, in 60 people with breast cancer.

However, there is still no evidence on the potential anti-cancer effects of wheatgrass in humans. More studies are needed to understand how it may impact cancer development in people.

Test-tube studies show that wheatgrass may help kill cancer cells and reduce cancer development. Also, one human study found that it may reduce complications of chemotherapy.

May Aid in Blood Sugar Regulation

High blood sugar can cause a wide array of symptoms, including headaches, thirst, frequent urination and fatigue.

Some animal studies have found that wheatgrass may help keep blood sugar levels under control.

Research on wheatgrass’ effects on blood sugar is limited to animals. More studies are needed to understand how it may affect blood sugar in humans.

Some animal studies have found that wheatgrass may help decrease blood sugar levels, though more human studies are needed.

Inflammation is a normal response triggered by the immune system to protect the body against injury and infection.

However, chronic inflammation is believed to contribute to conditions like cancer, heart disease and autoimmune disorders.

Some research shows that wheatgrass and its components may help reduce inflammation.

One small study in 23 people looked at the effects of wheatgrass juice on ulcerative colitis, a disease characterized by inflammation in the large intestine.

Drinking just under 1/2 cup (100 ml) of wheatgrass juice for one month reduced disease severity and rectal bleeding in patients with ulcerative colitis.

Wheatgrass is also rich in chlorophyll, a plant pigment with powerful anti-inflammatory properties. One test-tube study showed that chlorophyll inhibited the activity of a specific protein that triggers inflammation.

Furthermore, another test-tube study found that the compounds in chlorophyll reduced inflammation in cells extracted from the arteries.

Most research is focused on certain compounds in wheatgrass or the effects of wheatgrass on a particular condition. More studies are needed to measure its potential anti-inflammatory effects on the general population.

One study found that wheatgrass may help treat ulcerative colitis, an inflammatory bowel disease. Additionally, test-tube studies have found that chlorophyll, a compound found in wheatgrass, may also decrease inflammation.

Many people have started adding wheatgrass juice to their diet as a quick and convenient way to boost weight loss.

Wheatgrass contains thylakoids, which are tiny compartments found in plants that contain chlorophyll and absorb sunlight for photosynthesis.

In one small study, supplementing a high-carb meal with thylakoids intensified feelings of satiety, compared to a placebo.

Similarly, a study in rats showed that supplementing with thylakoids increased satiety by slowing down the emptying of the stomach and increasing the release of hormones that decrease hunger.

Another study found that giving thylakoids to rats on a high-fat diet resulted in decreased food intake and body weight, compared to a control group.

However, keep in mind that thylakoids can also be found in many other food sources, including green vegetables and leafy greens like spinach, kale and lettuce.

Human and animal studies have found that the thylakoids in wheatgrass and other green vegetables may increase satiety and weight loss.

Easy to Add to Your Diet

Wheatgrass is widely available in powder, juice and capsule form and can easily be found at health food shops and specialty grocery stores.

Furthermore, if you are able to grow wheatgrass at home, you can use a juicer to make your own wheatgrass juice.

Besides drinking wheatgrass juice, you can use the juice or powder to boost the nutritional content of your favorite green smoothies.

You can also mix wheatgrass juice into salad dressings, teas or other beverages.

Wheatgrass and its components have been associated with many health benefits, including weight loss, decreased inflammation, lower cholesterol and better blood sugar control.

However, research on its effects in humans is lacking, and many studies are focused solely on its specific compounds.

Although more studies are needed to confirm the benefits of wheatgrass, drinking it as part of a well-balanced diet could help provide some extra nutrients and several health benefits.